The State That Sticks to New Year’s Resolutions Longest 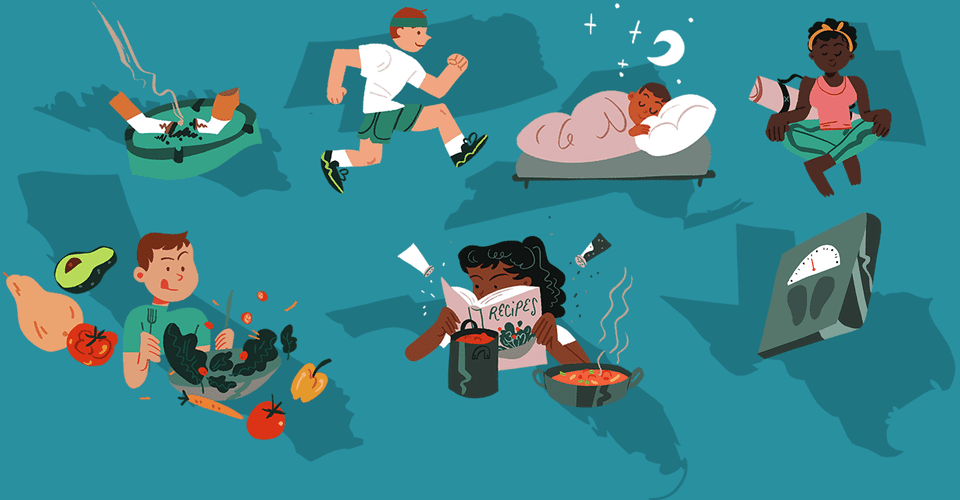 Overview
By
Team Verywell
Updated on August 12, 2019
Table of Contents
View All

Every year, aspiring healthy eaters, exercisers, better sleepers, and more circle January 1st on their calendars—or maybe January 2nd for those who ring in the New Year with particular gusto. Making a New Year’s resolution is practically an American institution, and we are really good at it. In 2019, millions of people across the country will take the oft-stated “New Year, New You” idea to heart and resolve to form healthier habits and long-lasting lifestyle changes.

Verywell readers are some of the most goal-oriented, aspirational individuals out there, so who better to ask about the ubiquitous idea of a New Year’s resolution?

In a survey of our email subscribers, 81 percent of respondents said they have made a health-related resolution in the past, and a whopping 89 percent are making one for 2019.

That’s a whole lot of people looking to lose weight, get in better shape, or improve their well-being—all based on the idea that a New Year’s resolution is the best way to get started. But what actually happens after the ball drops and it’s time to follow through? We at Verywell decided to find out.

Which State Continues Resolutions the Longest?

In the spirit of healthy competition, we’ll be spending our New Year learning how people in every state are spending theirs. We know that interest in lifestyle goals peaks early in January, so we have two questions: How long does that interest last, and which state maintains that interest the longest?

Based on the kinds of articles our millions of readers are visiting, we can see when interest in healthy lifestyle goals peaks, and when it eventually falls. By tracking this info state by state, we will also learn which states go the farthest toward making their New Year’s resolutions stick for good.

Ultimately, only one state will be left standing. Be sure to check back every week to see if your state is still rolling. Maybe you will feel inspired to help the cause, but should your state fall off the map, don't give up! With the right strategies, you can outlast your neighbors and continue working toward your personal goals.

It looks like New England is off to a rough start, with Vermont, Connecticut, and Massachusetts losing interest in their resolutions. If the cold weather is keeping you inside, there are plenty of ways to stick with your goals. Try some great exercises you can do right in your living room, or swap your usual comfort foods for nutritious and heartwarming homemade soup.

Four more states in the Northeast—New Jersey, Virginia, Pennsylvania, and Rhode Island—join the growing list of states having a tough time sticking to their healthy resolutions. But they aren't the only ones! This week, Montana becomes the first state west of the Mississippi to be eliminated from our competition.

Delaware stands alone as the only Northeast state left in the competition, as frigid temperatures slowed down New Yorkers and the remaining New England states. Farther down the Eastern seaboard, the Carolinas were eliminated together in a show of solidarity. So far, the West and Southwest remain committed to their goals.

We're sensing a pattern here. A polar vortex hit the Midwest, and folks in states like Indiana, Illinois, Missouri, and Kentucky couldn't keep pace with their resolutions. Delaware, tell us your secret.

As the calendar turns, seven more states have been turned off from their resolutions. With Delaware, Nebraska, and the Dakotas exiting the competition together, the entire northeast and midwest have hit what seems to be a weather-aided impasse in the way of their goals.

With one week left in the competition, some early favorites like Hawai'i and California were narrowly edged out by the remaining states. Ranging from the southeast to the northwest, only eight states are left—come back next week to find out who will be declared the winner!

Outlasting Arizona, Nevada, Idaho, and every other state, the winner is...Tennessee! Not only have Verywell readers in the Volunteer State maintained their interest in resolution-related content, but that interest has actually increased throughout the competition. Given what we have seen and heard from our readers about how difficult it is to follow through on New Year's resolutions for more than a few weeks, this is quite the feat.

Whether you have stuck with your resolution or didn't make it past the middle of January, know that there is never a bad time to work on self-improvement. Recommit to your goal, refocus on the small steps it takes to reach it, and remind yourself why you want to make a change in the first place.

Historically, visits to Verywell—specifically around topics related to making a health resolution—spike on a specific day soon after January 1. Those visits decrease over time as people become less interested in their resolutions and the related content on Verywell. For this story, we are tracking this data by the state every week for seven weeks. Every week, we will “eliminate” the seven states in which visits to the site’s resolution-related content decreased the most over the previous week until only one state is left.

If you are one of the millions of Americans making a resolution this New Year, history tells us—unfortunately—that you may be unlikely to sustain your resolution for very long. In fact, we found that it’s very common for people to give up on their goal before the calendar flips to February. We sure can set resolutions, but we don’t seem to be very good at seeing them through long-term.

In the past couple of years, interest in resolution-related content on Verywell spiked upward during the first week in January, and dropped by 50 percent in most states by the end of the month. Only Georgia, West Virginia, and Hawaii made it to February before returning to a pre-New Year’s level of interest.

5 Tips to Make Your Resolutions Stick

If you struggle with your New Year’s resolutions, don’t worry—as you can see, you’re not alone! It is fundamentally difficult to drastically and permanently adjust habits that you’ve developed over many years, no matter how eager you are to make a change.

Does this mean you should give up on trying to set goals for a healthier lifestyle? Of course not! On the contrary, this is simply a chance to learn how to set yourself up for success, no matter what time of year it is. Not only is it inspiring that so many people make resolutions year after year—even if they haven’t worked in the past—it can help you work toward this year’s goals. A positive attitude can actually improve athletic performance, for example.

Whether you’re trying to take up Pilates in January or start jogging in June, here are five practical and attainable strategies that can help motivate you to stick with your goals long after the initial honeymoon phase has worn off.

There are a number of reasons why the typical New Year’s goals don’t last. Progress can be slow, and it takes a lot of work to lose weight or get in shape, especially if you are starting from scratch. That’s why it’s important to approach the goal-setting process using small, achievable steps that will have you steadily improving without causing burnout.

SMART (Specific, Measurable, Adjustable, Realistic, and Time-based) goals are a great way to stay motivated for both short- and long-term resolutions. Don’t resolve to get in better shape; instead, resolve to cut your mile time by a specific amount over the next six months. Suddenly, you have an attainable, trackable goal that you’ll be motivated to hit, and that won’t be derailed by short-term setbacks.

It’s important not to feel like you have to make up for lost time—75 percent of our survey respondents are over 35 and making a resolution for the first time, so it’s never too late to get started! Even sustaining light beginner-level activity can lead to long-lasting health benefits.

The majority (66 percent) of our survey respondents are not planning to try a specific health trend or fad as part of their 2019 resolution. But if the latest trend works for you, that’s awesome! Based on our survey, we anticipate that many people will try eating strategies like intermittent fasting and ketogenic or plant-based diets. On the fitness side, many folks are looking to join a gym, try yoga, or start walking more. With obesity levels in the US as high as 40 percent, it’s no surprise that weight loss is among the most common New Year's resolutions.

Following a trend, however, is not always a sustainable way to achieve a goal. Certain fad diets, for example, can be too restrictive or complicated, and often come with unrealistic expectations that can set you up for failure. By setting moderate, reasonable goals, it IS possible to achieve weight loss, no matter how hard it seems at times.

Commit to your goals with a friend or family member. Our survey showed that most people, nearly 74 percent, aren’t committing to their resolution with a partner. Doing so can give you an extra motivational boost with the knowledge that someone will be right by your side for all of the highs and lows of attempting a major lifestyle change.

Research shows that you’re more likely to reach your goals with support. Maybe even more important than what you’re committing to is considering who you can rally to be on your team. Don't have a friend or family member committing to the same goal? Downloading a fitness tracking app or joining a group on social media can make a big difference in staying accountable to your goals.

Find What Works for You

There is evidence that being part of a gym is associated with increased physical activity, but with the proper plan, it’s certainly possible to stay in shape without spending a dime on a pricey membership, subscription-based diet, or piece of exercise equipment.

If you tailor your goals to fit your personal eating or exercise preferences, it’s more likely that you will succeed, and enjoy yourself while doing it, whether or not you've put money toward your resolution.

Plan for Progress, Not Perfection

It’s important to remember there is no such thing as perfect, and the factors that make up a healthy lifestyle are not always black and white. Resolutions don’t have to be all or nothing. Habits are extremely hard to change and even harder if you’re not celebrating the small successes along the way.

Our tip here is to “do the next right thing.” Didn’t have a balanced breakfast? Try to choose a more nutritious lunch. And if you don’t do that, no worries. Don’t shame yourself into thinking you should skip your afternoon snack. Instead, do the next right thing and have a healthy snack. And if you do, who knows, maybe you will feel like you have the energy to exercise after work!

Instead of going down a shame spiral after breakfast and putting off healthy habits until the next day, do the next right thing and you can turn your day around.

New Year’s resolutions are so pervasive in our culture, but we often don’t take the time to understand how to make them work for us. With a realistic approach and strategic goal-setting, though, it is possible to stay motivated past January, even if history says otherwise.

Next December, as you begin looking ahead to 2020, you won’t be regretting missed opportunities; instead, you’ll be able to reflect on all the progress you’ve made and look forward to the next steps that will take you even closer to your goals.

Was this page helpful?
Thanks for your feedback!
What are your concerns?
Related Articles