Foods to Avoid When Going Gluten-Free

Many foods contain gluten. In fact, if you look at your typical breakfast menu, lunch selections at a local deli, or on any family dinner table around the country, the odds are high that most of the foods provided are a source of gluten.

Of course, you probably know that most cereal, pasta, bread, cake, cookies, and other processed foods contain gluten. But what about the less obvious foods like condiments, beverages, and even meat products that contain it? Perhaps the more important question should be: What foods don't have gluten?

How to Find Gluten in Foods

Food manufacturers use gluten in many different ways, some of which are much more obvious than others. For example, many food additives are derived from gluten-containing grains. Food flavorings, artificial and natural colors, and even some vitamin supplements may contain gluten.


The decision to go gluten-free can be daunting because gluten grains are so prevalent. In fact, even foods that don't directly contain gluten may be subject to cross-contamination because they are manufactured around other foods that do.

If you want to avoid gluten in your diet, you'll need to check the ingredients of every food product you use. In addition, you'll need to learn how to identify gluten on food labels (even when it's hidden) and the various places gluten can hide.

It's certainly possible to follow the gluten-free diet (more and more people are doing it every day) but to do so, you need to know the foods that have gluten.

You might feel more comfortable buying foods that have a gluten-free label on the package. But relying completely on the label can be tricky.

When you see the term "gluten-free" on a food label, it means the food meets the U.S. Food and Drug Administration's legal definition of "gluten-free." This doesn't necessarily mean the food has zero gluten in it. Rather it means that it contains just a very small amount. Specifically, the FDA defines "gluten-free" foods as those containing less than 20 parts per million (ppm) of gluten.


Also, the labels are voluntary. Manufacturers that wish to cater to gluten-free consumers can add the labels to their packaging, but they aren't required to do so. The FDA requires manufacturers to determine whether fermented and hydrolyzed foods such as yogurt and green olives were gluten-free prior to fermentation of hydrolysis.

There are some products that are certified gluten-free. Companies that provide this label have voluntarily welcomed inspection of their food by one of three certifying organizations: the Gluten Intolerance Group's Gluten-Free Certification Organization (GFCO), the Allergen Control Group/Canadian Celiac Association (ACG/CCA), and the National Celiac Association (NCA).

Because wheat has gluten in it, foods made with wheat flour—breads, cookies, cakes, donuts, rolls, bagels, muffins, scones, and other pastries, plus conventional pasta and pizza, along with many cereals—all contain gluten.

Wheat can appear on ingredients labels under many different words, including flour, bread flour, wheat flour, white flour, whole wheat flour, pasta, bulgur, spelt, and kamut. Any of those words on a food label indicate the food isn't safe for someone on the gluten-free diet.

But there are other foods that contain gluten that you might not expect.

Barley appears less frequently than wheat on the dinner table, but it is still in many popular foods such as soup. Barley is also used to make malt, found in malted milk, malted chocolate and in other products.

In addition, soups and casseroles sometimes include pearl barley, almost always listed as such on a label. Barley extracts can serve as a sweetener or as a flavor enhancer in some processed foods, and they may be hidden under the words "natural flavor." For example, the ingredient "natural smoke flavor" usually contains barley.

Lastly, beer almost always has barley in it unless it is a designated gluten-free beer.

Rye—the least common of the gluten grains—appears not unexpectedly in rye bread. But it is also found in many brands of crackers.

Whiskey is also sometimes made from rye. Some sources say that whiskey can be consumed on a gluten-free diet, but not everyone will be symptom-free when consuming the beverage.

Rye is rarely used in other processed foods, but it is still important to check the label.

While oats do not organically contain gluten, oat-containing products are commonly a source of cross-contamination. Many oat products are manufactured in plants where wheat and other gluten products are processed.

You probably wouldn't imagine that your favorite Asian condiment contains gluten, but soy sauce is a common source. Wheat is the first ingredient in most brands. If you like to add soy sauce to your food, look for a gluten-free brand.

Condiments That Are Gluten-Free

Sauce mixes, gravy mixes, cream sauces made with a roux, and spice mixes that you buy at your local grocery store may contain gluten, according to the Celiac Disease Foundation. Also, canned soups may use flour often as a thickener instead of cream, rendering them unsafe for those avoiding gluten. Boullion or stock cubes may also be a source of gluten.

Any processed meals that contain MSG may contain gluten. And surprisingly, salad dressings are another potential gluten-containing food. Many condiments, like ketchup, mayonnaise and mustard are usually gluten-free, but it is important to check labels.

58 Condiments That Are Really Gluten-Free

Believe it or not, some dairy products may contain gluten. For example, ice cream may contain it because starch, sometimes wheat starch, is used to provide texture. It's even possible for yogurt and other milk products to contain gluten ingredients.

If you're new to the gluten-free diet, all this may seem quite daunting. It's true that gluten is either the main ingredient or a featured ingredient in many foods and meals, and avoiding it certainly can be challenging, especially at first.

When you first go gluten-free, it's a good idea to eat mainly fresh meats, fruits, and vegetables. That way, you avoid gluten naturally. As you become more confident, you then can add in some gluten-free-labeled products (there are plenty, ranging from soup to nuts). It's only once you become proficient in eating gluten-free that you can feel confident reading labels and making a judgment about whether a food that isn't labeled "gluten-free" contains gluten.

12 Sources
Verywell Fit uses only high-quality sources, including peer-reviewed studies, to support the facts within our articles. Read our editorial process to learn more about how we fact-check and keep our content accurate, reliable, and trustworthy.
Additional Reading 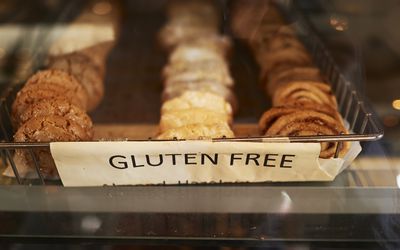