When you see the term "gluten-free" on a food label, it means the food meets the U.S. Food and Drug Administration's legal definition of "gluten-free." This doesn't necessarily mean the food has zero gluten in it—just a very, very small amount.

There is no official or legal definition of the term "no gluten ingredients" on food labels.

However, manufacturers generally use the term "no gluten ingredients" on products that do not contain any gluten-containing ingredients but haven't been tested for gluten, or were at risk for gluten cross-contamination during processing.

Read on for more on what "gluten-free" and "no gluten ingredients" really mean on food labels, and what you should look for on food labels to stay safe if you have celiac disease or non-celiac gluten sensitivity.

You might think the official definition of a "gluten-free food" would be food that's 100% free of gluten. However, the FDA states that to be "gluten-free," a food must contain fewer than 20 parts per million (ppm) of gluten.

Even though it's a tiny amount, it's not zero. However, some clinicians argue that the amount is effectively zero for people who are allergic to gluten. Research has shown that some people who have celiac disease can eat foods with up to 10 milligrams of gluten per day without experiencing symptoms.﻿﻿

How Much Gluten Can Make Me Sick?

The FDA considered using "undetectable gluten" as its "gluten-free" standard but decided it would be too difficult for food manufacturers to meet.

Under the FDA's rules, manufacturers can legally label a food "gluten-free" even if the food contains an ingredient made from wheat, barley or rye (or a crossbreed from those grains). The ingredient must have been processed to remove the gluten to below the 20 parts per million level.

These labels are voluntary, not mandatory. Manufacturers that wish to cater to gluten-free consumers can add the labels to their packaging, but they aren't required to do so.

The labels do not eliminate the need to learn how to identify gluten on food labels because the FDA's rules do not require manufacturers to disclose gluten-containing ingredients.

If you're particularly sensitive to trace amounts of gluten, remember that the FDA's definition still allows tiny amounts of gluten in gluten-free foods. This means that it's still possible to get gluten symptoms from foods labeled as gluten-free. You need to know your own tolerance and monitor your own reactions to what you eat.

Adherence to FDA labeling is strictly voluntary and is not subject to ongoing inspections to ensure the regulatory standards are met. That said, most studies suggest that around 95% of manufacturers comply with the guidelines.﻿﻿

If a product is misbranded as being either "gluten-free," "free of gluten," "without gluten," or "gluten-removed," the manufacturer of that product could be subject to harsh regulatory action by the FDA.

While that should provide some assurance to consumers, many advocates complain that the gluten threshold is not enough. They point to studies that have shown that people with celiac disease can still get sick when eating far less than 20 parts per million.

Proponents believe that "gluten-free" should be defined as having an undetectable amount of gluten (meaning that the level is so low as to avoid detection by current testing technologies).

Moreover, they argue that there have yet to study ​the effects of gluten in persons with non-celiac gluten sensitivity.

If you're particularly sensitive and react to even the tiniest trace of gluten, you need to take more aggressive steps when choosing products. You may need to only buy products that are certified gluten-free.

To be certified gluten-free, each organization has different requirements.

What 'No Gluten Ingredients' Means

Manufacturers might use the term "no gluten ingredients" instead of "gluten-free" if they don't want to test a product for gluten or are concerned that a product might not consistently meet that FDA standard of 20 parts per million.

For the consumer, this designation signals a bit more uncertainty about the gluten-free status of the product.

In fact, several companies that produce both gluten-free products and gluten-containing products use the term "no gluten ingredients" for products made with ingredients that don't include gluten, but might be at risk for cross-contamination or are not tested for gluten.

Finally, some in the gluten-free community say that foods with no obvious gluten ingredients listed on their labels are safe to eat, especially if the company in question has a policy of clearly labeling any gluten-containing ingredients. However, these products still can contain plenty of gluten from cross-contamination.

Are 'No Gluten Ingredients' Foods Safe?

Foods labeled "no gluten ingredients" (or which don't appear to contain gluten ingredients) can vary widely in their actual gluten content. Some might actually meet standards for "gluten-free," while others may have a high degree of gluten cross-contamination.

People do vary widely in their levels of sensitivity to trace gluten. Some people can eat food products made on production lines that are shared with gluten-containing products and not get sick, while others even need to avoid products made in the same facility to avoid getting sick.

Before you do buy a product with the "no gluten ingredients" label, take a good look at the ingredients label to see if you spot any so-called allergen disclosures (i.e., a statement like "Made on equipment that also processes wheat").

Companies often will say if a product is made on the same lines or in the same facility as wheat-containing products. If you don't see anything problematic or potentially risky on the product label, you'll need to use your own judgment on whether to consume the product.

If you're particularly sensitive, you may want to steer clear or sample just a small amount at first to minimize any potential reaction. If, on the other hand, you rarely have trouble with getting sick from consuming foods with gluten, you might be fine.

Food labeling can be confusing, and it's especially confusing for gluten since three different grains (wheat, barley, and rye) can contain gluten.

If you have any questions or find yourself getting confused, consider asking your doctor to refer you to a dietitian who can help you navigate the gluten-free diet. 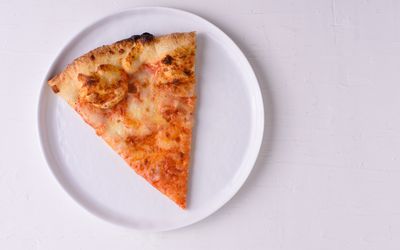