Lobster is a popular seafood choice with impressive nutrition stats to offer. You may have heard that lobster is high in cholesterol. Although this is true, lobster is also low in saturated fat. As with other shellfish, lobster is no longer demonized as a cholesterol-raising food. There are several reasons to consider treating yourself to lobster the next time you're planning for a special meal.

This nutrition information is provided by the USDA for 1 cup (145g) of boiled or steamed lobster meat.

Lobster is naturally carbohydrate-free and has no fiber or sugar.

One cup of cooked lobster meat only has 1.3 grams of fat, the majority of which come from polyunsaturated fats. There is also some monounsaturated and saturated fat in lobster. Lobster is a good source of essential omega 3 fatty acids.

Lobster is high in cholesterol at 212 milligrams per cup. Although dietary cholesterol is no longer believed to raise blood cholesterol levels, the 2020–2025 USDA Dietary Guidelines for Americans promote a low cholesterol diet.

Because lobster is not usually an everyday food, consuming it from time to time is unlikely to cause a cholesterol issue for most people.

Because lobster is a marine animal, it can be very high in sodium, with just 1 cup providing 705 milligrams of sodium. That is nearly 31% of the daily recommended limit for most people (2300mg per day).

One cup of boiled or steamed lobster contains approximately 129 calories.

Here is how lobster compares to other types of fish and shellfish (all nutrition facts for 3- or 4-ounce servings):

Despite its reputation as a high-cholesterol food, lobster has several nutritional qualities that offer health benefits.

Poor zinc status is associated with higher rates of infection and pneumonia. A 1-cup serving of lobster has almost 6 milligrams of zinc, which is 67% of the daily requirement for women and 56% for men.

May Lower Risk of Prostate Cancer

Higher intakes of seafood, like lobster, are associated with lower rates of advanced prostate cancer. This benefit is credited to seafood's omega-3 fatty acids, EPA and DHA. Since our bodies are unable to produce omega-3s, consuming them through seafood, nuts, and seeds is essential.

Lobster is an extraordinary source of choline. Human studies show that people who consume adequate choline during pregnancy provide long-term benefits to their children's memory function.

The benefits of choline during pregnancy have also been confirmed by several animal studies. During the second trimester of pregnancy, 450 milligrams is considered an adequate intake of choline, and 1 cup of lobster provides 26% of this amount.

Choline is not only essential during pregnancy, but also for older adults. In this group, choline intake is associated with better performance on verbal and visual memory tests and fewer indicators of Alzheimer's disease. The fatty acid DHA, also found in lobster, is associated with similar reductions in cognitive decline.

Lobster provides two key minerals required for proper thyroid functioning: iodine and selenium. Although it's not usually advised to supplement these minerals (unless your doctor suggests otherwise), foods like lobster and other seafood products will cover your dietary requirements.

If you prevent a deficiency by eating a varied diet, your doctor may be able to rule out dietary causes of poor thyroid function.

Shellfish (including lobster, crab, and shrimp) is a common cause of allergic reactions. Adults are more susceptible to shellfish allergies than children.

As with other wild-caught shellfish, lobsters can be susceptible to environmental hazards including parasites, biotoxins, heavy metals, and chemical pollutants. Always choose fresh seafood from a reputable source and follow food safety guidelines when preparing and storing lobster.

Lobster is one of the "best choices" for people who are pregnant and breastfeeding, according to the American College of Obstetricians and Gynecologists (ACOG). During pregnancy, limit seafood to two to three servings (8 to 12 ounces) per week.

There are two popular varieties of lobster: the American lobster (also known as the Maine lobster, Massachusetts lobster, or Canadian lobster) and the spiny lobster. Lobsters are all wild-caught as farm-raising methods for lobster production are not yet available.

Lobsters come in a range of colors, including greenish-brown, blue, light yellow, dusty orange, and patterned. After cooking, all lobsters turn red as a result of a chemical reaction in the shell. Depending on their age, lobsters can be as small as 1.5 inches to a record high of 2.1 feet long.

Lobsters begin to spoil shortly after being killed, so they must be cooked or frozen right away. When a live lobster is frozen, the chemicals of degradation are not released as quickly. Boiling a live lobster also prevents rapid spoilage. That's why many people prefer to purchase live lobsters to cook just before eating.

If you purchase a live lobster, cook it the same day. Once cooked, lobster should be refrigerated in an airtight container and consumed in two to three days. Cooked, picked lobster meat will last three to four days in a refrigerated moisture-proof bag.

Always keep raw meat separate from other foods and thoroughly wash surfaces, hands, and utensils before and after prepping. Frozen lobsters should be thawed safely, either sealed and submerged in cold water or in the refrigerator. Lobster must reach an internal temperature of 145 degrees Fahrenheit for at least 15 seconds before it is safe to eat.

Lobsters are known for their sweet, rich flavor and savory texture. Because lobster meat is naturally flavorful, it's delicious with simple preparation methods.

Lobsters can be poached, steamed, simmered, baked, or grilled. You can serve cooked lobster hot or cold. Lobster meat can be used in casseroles, salads, soups, and sauces. Lobster tails can also be stuffed.

In addition to the white meat, the tomalley (which is the olive green liver) and coral (the reproductive roe found in female lobster species) can also be eaten. These items are served as delicacies. 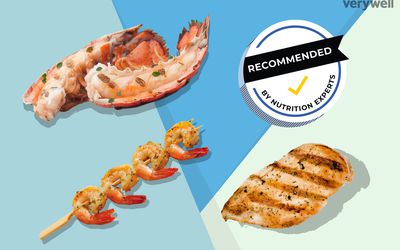 What to Eat at Red Lobster: Healthy Menu Choices and Nutrition Facts