How to Do a Push Press

The barbell push press is a full-body movement—one of several related exercises that helps to develop not only shoulder strength but also power and stability through the lower body and core. Exercisers usually include the push press in their training regime after mastering the overhead press (also called a strict press or military press) but before moving on to the more advanced push jerk or split jerk.

Weightlifters commonly use the push press to increase muscle mass and build strength but athletes who participate in sports that require jumping force also find the movement beneficial for boosting performance.

While there are many benefits to the exercise, the push press is an advanced movement that requires the use of several different muscle groups and coordinated skills. People who are new to this skill should work with a qualified coach or trainer to learn the proper mechanics before adding significant weight to the exercise.

The push press is one of several weightlifting overhead pressing derivatives (WOPDs) that has a long history of use in the sport of lifting. For years, the overhead press was considered a gold standard by which the strength capability of an athlete was measured.

In more recent years, the push press—which adds a lower-body push to the overhead press—has been adopted in CrossFit gyms and in weightlifting rooms across the country as a more effective way to increase strength while also improving speed, power, and core strength for more effective athletic performance.

In more recent years, the push press—which adds a lower-body push to the overhead press—has been adopted in CrossFit gyms and in weightlifting rooms across the country as a more effective way to increase strength while also improving speed, power, and core strength for more effective athletic performance.

A 2019 study published in Sports Medicine identified several other ways in which the push press and other WOPDs provide benefits.﻿﻿

Learning the push press may help reduce the risk of injury during training and weight lifting performance.

For many weight training and CrossFit athletes, learning the push press is a precursor to a very similar movement called the jerk—a key component of the widely used clean and jerk exercise. According to several studies, the jerk is considered to be one of the most complex and difficult skills in the modern era of weightlifting and the movement is the part of the clean and jerk that shows the highest incidence of failure in weightlifters.﻿﻿

By establishing a solid foundation of alignment and strength with the push press, CrossFitters and other athletes may reduce their risk of injury.

The push press is identified as providing greater benefits that other WOPD exercises and as compared to other well-studied upper body exercises for developing motor control and coordination. The exercise requires the lifter to transmit force through the kinetic chain from the lower body to the upper extremities, which creates a powerful stimulus to strengthen muscles of both the upper and lower body.

Additionally, the movement requires motor control and coordination throughout the trunk and lower body muscles in order to stabilize and transmit forces while standing.

When compared to the bench press, the push press is considered to be more applicable to explosive athletic activities and sports due to the technical challenges requiring speed, acceleration, timing, and coordination.

Because the push press requires high levels of maximal strength and power and because the movements are mechanically similar to many tasks required in sports, the exercise is considered to be a good a stimulus to develop rapid force production, maximal strength, and power in sporting activities, especially those that involve sprinting, jumps, and change of direction. These may include basketball, football, lacrosse, and other athletics.

In short, when athletes learn to coordinate the extension of the ankles, knees, and hips with speed and force using the push press, they are better equipped to execute the moves on the ball field.

Additionally, other studies have suggested that power movements like the push press are important for developing strength in the core so that power can be transferred from the lower body to the upper body during sports like football. Research suggests that exercises like the plank put the body in a nonfunctional static position and may be less effective. ﻿﻿

The push press is an advanced exercise that builds on other foundational movements. It is smart to master the overhead press first before attempting this exercise. The overhead press will help you to develop the shoulder strength and confidence to feel comfortable lifting a bar overhead. An overhead press can be performed with dumbbells, but you'll want to learn the move with a barbell before moving on to the push press.

Also, because the push press involves several different complex and coordinated movements, it is smart to try the movement with little to no weight first. When you have mastered the mechanics, add weight slowly.

To prepare for the exercise, place a barbell on a rack in front of you or at your feet.

There are a few common blunders that are often seen when performing the push press. Most mistakes involve alignment, especially in the dip phase of the exercise.

Be careful not to place your feet too wide when preparing for the push press. It might feel more stable to have your feet further apart, but it is important to keep them at only hip-distance apart. Feet should be parallel.

Also, be careful of your hand and elbow placement during the preparation phase. The push press is similar to other exercises that involve placing the barbell at chest height. In some of those exercises, the elbows point forward and the palms face up. In the push press, however, it's important for the elbows to naturally relax down so the palms are facing forward when you begin.

All of the power in this move comes from the dip that happens before you press the bar overhead. There are several things that can go wrong during this important movement.

First, it's natural to lower the body into a squat rather than a dip. In a squat, the hips move back when the knees bend and the torso comes slightly forward. In a push press dip, however, the hips stay directly below the chest and head. The knees come forward—which may feel odd, but you don't bend deeply enough that the heels feel like they need to come off the floor

It's also possible to arch the back during the dip. This is a sign that you are lifting too much weight. If you can't control the dip, decrease your weight.

Lastly, some exercisers lean back on the dip, putting pressure on the lower back. Again, keep the head, chest, and hips aligned as you bend the knees.

While the push press should be a fluid movement, you don't want to start lifting the bar until you are at full hip extension. That means that until your legs are straight, the bar stays at chest level.

If you find that you always want to begin the overhead press with the knees bent, practice with dumbbells and have a coach watch to provide movement cues.

Not Engaging the Core

Keep your back long and strong throughout the overhead press. If you find that you are arching your back remind yourself to engage your core. Imagine that you are tightening your midsection to prepare for a punch to the gut. If you struggle to keep the core engaged you may be lifting too much weight.

If you feel that you are lifting the right amount of weight and you still find that you are arching the back, double-check that you are engaging through your core through every phase of this exercise. Core stability protects your back and helps to prevent injury.

Doing Too Many Reps

The push is not designed to help you improve your endurance or general fitness conditioning. This movement is designed to build force and power. As such, you should only perform between one and five repetitions of the movement. Adding more repetitions can also lead to a breakdown of form and eventually to injury. Add more weight if you can comfortably complete more than five reps.

Beginners should work with a trainer when learning this move. But if you don't have access to a professional, you can try the move at home using no weight at all or simply using a long bar. This allows you to learn the sequence of the movements without the risk of injury.

While it is common to load the barbell with 45-pound weight plates or more, there is no need to lift that much when you are first starting out. Start with 10-pound plates or even less if necessary. If no light weights are available, consider trying the movement with dumbells or with kettlebells to get stronger and more comfortable with the sequence.

Once you master the push press, consider advancing to the jerk movement. A jerk is very similar to a push press but it adds slightly more momentum. This exercise starts exactly like the push press but just before the arms are fully extended overhead, you'll add one more dip to position the body under the bar.

The differences between the jerk and the push press are subtle but important. The jerk is an essential part of the clean and jerk exercise. The jerk should be mastered first before putting it together with a clean.

The push press is common exercise that you'll see in almost any weightlifting gym or Crossfit box. You may be tempted to grab a barbell, load it up and give it a try. But this is a complex movement with a risk of injury to the shoulders, back, knees, hips, and wrists. It's smart to break down the movements and learn them with care before attempting it. The payoff is substantial if you learn to do it properly.

For safety's sake, work with a certified trainer to learn the basic movements. Then (if possible) perform the movements in front of a mirror so that you are able to check your alignment during each phase.

Incorporate this move into one of these popular workouts: 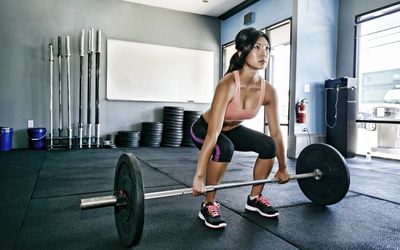 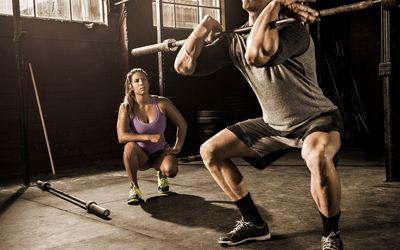 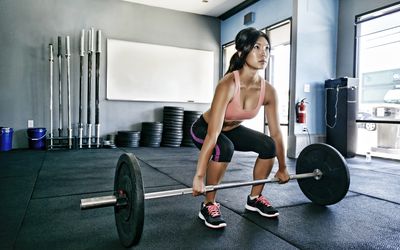 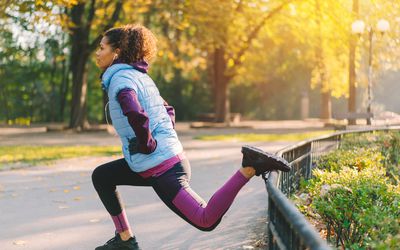 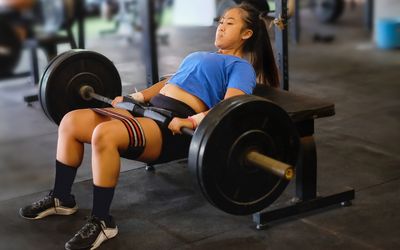 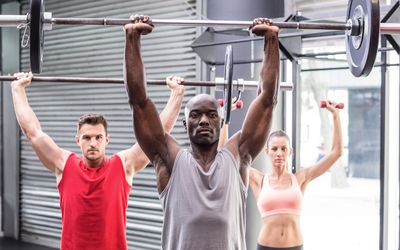 How to Do a Barbell Shoulder Press: Proper Form, Variations, and Common Mistakes 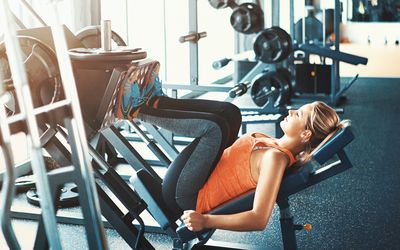 How to Do the Leg Press 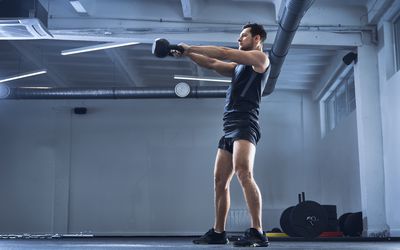 How to Do a Kettlebell Swing: Proper Form, Variations, and Common Mistakes 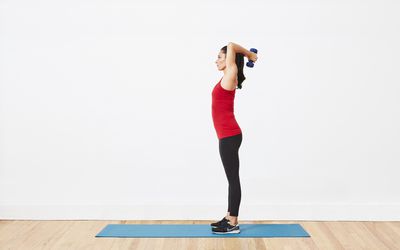 The 8 Most Effective Triceps Exercises 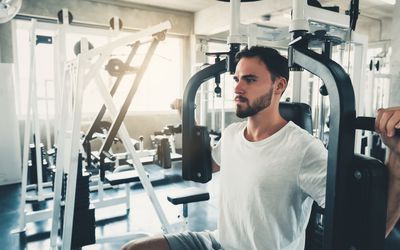 How to Use a Chest Fly Machine: Proper Form, Variations, and Common Mistakes 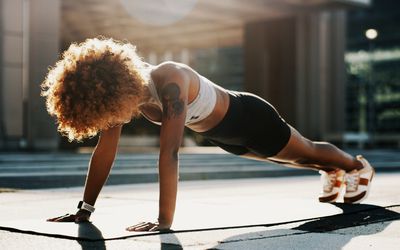 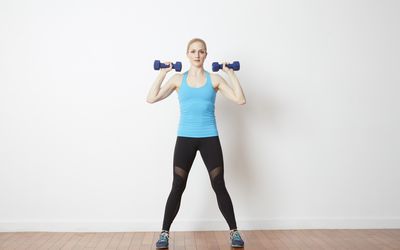 How to Do a Dumbbell Overhead Press: Proper Form, Variations, and Common Mistakes
10 Quad Exercises for Stronger Legs 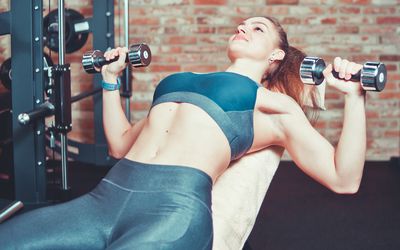 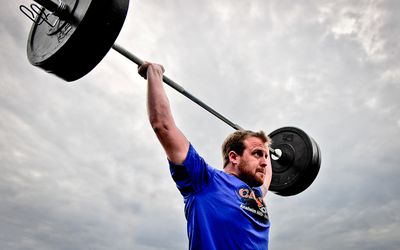