You'll find these gluten-free chips in many supermarkets

Potato chips are made mainly with potatoes and oil along with flavorings, and there are multiple options for gluten-free potato chips on store shelves, including products from the following brands:

Read on for the complete lists of gluten-free potato chips and multigrain chips.

Some brands of potato chips contain gluten ingredients and others are subject to gluten cross-contamination in production, so we're not quite at the point where it's possible to grab just any bag of potato chips and assume it's gluten free.

The following snack food brands make gluten-free potato chips. They all either certify their products as gluten free, label them "gluten-free," or provide a list of ingredients they consider to be gluten free.

The company that makes these chips, a subsidiary of Snyder's-Lance, actually is headquartered on Cape Cod and offers factory tours.

The chips themselves are marked "gluten-free," which means they meet the U.S. Food & Drug Administration's standard of fewer than 20 parts per million of gluten.

Food Should Taste Good holds gluten-free certification for all its chips (including gluten-free tortilla chips and gluten-free multigrain chips in addition to potato chips) through the Gluten-Free Certification Organization (GFCO), which tests to make certain products contain less than 10 parts per million of gluten.

Its gluten-free potato chip flavors include the following:

Frito-Lay tests its products for gluten and reports that the products on this list, including many Lays, Ruffles, and Stax potato chip flavors, contain less than 20 parts per million of gluten.

Other products, including many flavored chips, contain no gluten ingredients but may be manufactured on the same lines as gluten products, and aren't tested to see if they meet the 20 parts per million gluten standard.

This brand, a subsidiary of the Hain Celestial Group, marks some—but not all—of its products gluten free. They should meet the minimum FDA standard of fewer than 20 parts per million of gluten.

Be aware that the "gluten free"-labeled products most likely are produced in the same facility as gluten-containing products, including Garden of Eatin' multi-grain chips, which contain both wheat and barley (and, as a result, are obviously not gluten free).

Before buying Garden of Eatin' products, always check the packaging, both to look for the "gluten-free" symbol and to make sure there are no suspect ingredients listed.

All Kettle brand potato chips are certified gluten-free by the GFCO and are processed in a gluten-free environment, according to the company's gluten statement, including:

You can purchase Kettle's gluten-free potato chips in regular-sized bags and in snack-sized bags, too.

These chips, available in eight flavors, including Hawaiian BBQ and Mexicali Salsa, are certified gluten free by the GFCO, meaning they contain fewer than 10 parts per million of gluten. One Potato Two Potato chips are sold on Amazon and in some Whole Foods, along with other outlets.

POPchips "pops" its potato chips as opposed to baking or frying them, which allows them to contain a lot less oil than regular potato chips. All the company's chips are certified gluten free.

POPchips offers a variety of products including:

Some of the chips contain dairy ingredients, but none contain soy, according to the company.

All chips made by Terra (a Hain Celestial company) are marked "gluten-free," indicating they meet the U.S. Food & Drug Administration's less than 20 parts per million of gluten standard.

Although I haven't seen any Terra chips that aren't marked gluten-free, make sure any bag you're considering buying contains the "gluten-free" logo on the package.

Utz brand snack chips maintain a list of products that meet the FDA's gluten-free standard. Check the list before indulging in any particular product, since the gluten status can change. Some people who are particularly sensitive to trace gluten have reported some problems with Utz products.

Many people prefer multigrain chips to potato chips because the multigrain snacks provide a bit of fiber which is important for digestive health, along with a crunchier, more substantial chip that holds up better when you dip it in salsa or guacamole.

There aren't as many gluten-free multigrain chip products on the market, but you do have multiple brands and flavors from which to choose.

These are billed as crackers, but to me, they qualify as chips. Crunchmaster makes them from whole grain brown rice, corn, a four-seed blend with sesame and millet, plus oat fiber (be aware that not everyone who eats gluten free can handle oats).

The crackers come in three flavors:

Crunchmaster is certified gluten-free by the GFCO, which requires testing to below 10 parts per million of gluten.

They're certified gluten-free by GFCO, meaning they contain less than 10 parts per million of gluten (since Late July also makes some gluten-containing products, always double-check to make sure what you're buying from the company is gluten-free).

The chips all are based on organic brown rice and rice flour; all contain organic corn, and some contain dairy ingredients. Lundberg chips are pretty widely available, especially in health food stores and in the natural food sections of supermarkets.

Way Better is certified gluten-free by the GFCO, which means its products contain less than 10 parts per million of gluten. Like other gluten-free multigrain chips, they're not always available in stores, but you can buy them online.

While not all chips on your supermarket's shelves are considered safe for someone with celiac disease or non-celiac gluten sensitivity, enough brands now test for gluten that you should be able to find a product you can enjoy pretty easily.

If you happen to be particularly sensitive to trace gluten, stick with one of the certified gluten-free brands, such as Food Should Taste Good, Kettle, or One Potato Two Potato. Otherwise, you have a wide variety of brands and flavors from which you can choose.

10 Gluten-Free Tortilla Chips
7 Sources
Verywell Fit uses only high-quality sources, including peer-reviewed studies, to support the facts within our articles. Read our editorial process to learn more about how we fact-check and keep our content accurate, reliable, and trustworthy.
Additional Reading 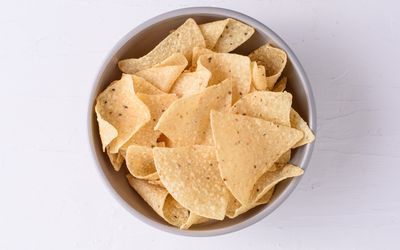 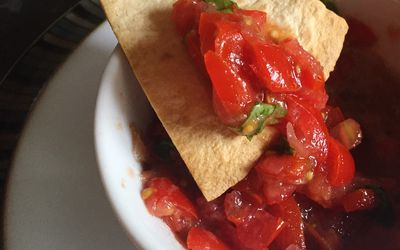